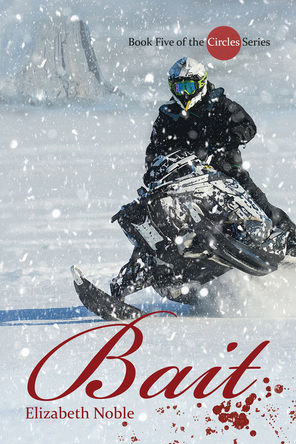 Cover art by TL Bland
Tyler McCall made a mistake that cost him his job, his freedom and everything he’d worked for. Now he’s living in the Black Hills of Wyoming, working two jobs and doing his best to not dwell on what he’s lost.

Linden Bourne is a no-nonsense FBI agent. His hunt for a killer takes him to Wyoming, he has questions for Tyler. Linden quickly realizes Tyler isn’t a suspect, but the next likely victim.
​
When he and Tyler they become trapped by a blizzard in an empty inn near Devils Tower they discover they’re not alone. The killer has targeted Tyler and won’t let a little detail like an unexpected visit by the FBI stop what they’ve planned to do. Linden is completely out of his element, but he’s sworn to protect and that’s exactly what he plans to do: protect Tyler at all costs.
​

Crystal's Many Reviewers gives 5 stars: Crystal Marie says:  I was literally on the edge of my seat during certain parts of the book because the suspense was that great that I couldn’t wait to find out what was going to happen next. Read the review.
Gay Book Reviews gives 5 stars: Natosha says: This is the first book that I have read in this series and I have to say that I will be going back and seeing if they are as good as this one and the same genre as this one. Even though this is part of a series it can definitely be read as a stand alone which I was glad about. Read the review.
Book Reviews and More by Kathy gives a B+: Kathy says: The fifth installment in Elizabeth Noble’s Circles series, Bait is a suspense-laden, engrossing mystery. Read the review.
The Blogger Girls: Nikyta gives 4 stars and says: ​All in all, I really enjoyed this story. I loved Tyler and Linden as characters and I was very intrigued by the mystery and trying to figure out who was killing all these people. I also liked the bit of action that resulted in the resolution. Definitely give this a go if you’ve enjoyed this series so far and looking for a quick action story with a bit of sweetness to it. Read the review.
Three Books Over The Rainbow: Lexy gives 4 infinities and says: How she melded the budding romance between Tyler and Linden together and entwining the story of a killer on the loose, is truly spectacular to say the very least, also the POV’s between Tyler and Linden was nicely done as well. Read the review.
Molly Lolly: Molly gives 4 stars and says: I liked how these two worked together to solve their problems. I also enjoyed seeing them build a relationship. A little bit at first and then far more when they weren’t in danger any longer. They have a sweet happily ever after ending and you know they’re going to make it for the long haul. I’d love to see more of these two in another story in the series. If not these two, then I at least hope for more books in the series because I enjoy the heck out of them. Read the review.
Alpha Book Club: Mollien gives 5 flames and says: Super hot chemistry that will keep you warm in any blizzard. Fast, exciting pacing that will keep you tapping that ereader screen to get to the next page. Read the review.

The Novel Approach: Maryann gave 5 stars and calls Bait A TNA Page Turner! She says:This story is a fast read, as are the other books in the series—descriptive, action packed, and well written with nicely developed characters. Read the review.
Rainbow Book Reviews: Christy says: Another scintillating mystery and thriller in the series. Read the review.
I've been fortunate to have had many readers offer reviews and comments. Thank you! They can be read on Amazon and Goodreads.

Linden slowly closed the yearbook and looked around the apartment. It was early afternoon, so there was light coming through the windows, but still there was a noticeable dimming in the room. He watched as Tyler cocked his head and then turned to study the wall at the far end of the room, near the kitchen. There was such silence inside it was almost frightening. Outside was a different matter. Without the low hum from the refrigerator or the sound of the heat kicking on, the blowing wind seemed louder than it had a minute ago. In fact, Linden hadn’t noticed the outside noises very much except when he was actually outside in the elements.

“I thought you said there was a generator?” Linden asked.

Tyler’s voice was close to a whisper. “Yeah, there are. Two, actually.”

“How long does it take before they kick on?”

“The one that powers this part of the building should have kicked on already. They both should’ve.” Tyler got up and walked to the apartment door.

“Wait.” Linden stopped him before he could pull the door open. “Where’s that shotgun you said you have?” He realized Tyler likely wouldn’t ask him to go back out into the storm. “You shouldn’t go alone.”

Tyler opened his mouth, probably to ask if that was necessary, then closed it again when Linden arched one eyebrow. A few long strides to the pullout couch and he reached under the base and extracted an older gun. Linden followed, took the weapon, and checked the chamber.

“Not much protection without the shells,” Linden observed.

Tyler nodded at the Pullman kitchen. “Above the microwave.”

Linden retrieved the shells and loaded the shotgun, then nodded at Tyler, who looked relieved. “Look, there are all of a sudden too many coincidences to not take this situation very seriously. I think we need to be cautious and smart about what we do from here on in.” He dipped his head toward the door. “Obviously someone has been hiding here, maybe even since the work crews left. I can only come up with a few reasonable explanations, and I don’t like a single one of them.”

Tyler pulled in a deep breath and let it out slowly. He focused on some point between his feet for a few seconds before lifting his head and standing a little straighter. “I think I have the same explanations. Someone is hiding here, and they don’t want to be found or they’re here waiting to catch someone alone.”

“Either situation presents us with a potentially very dangerous person. If they’re hiding out, it’s a good bet it’s because they’ve done something wrong. If they’re here for someone, that person is you, because other than a few people at my FBI office and Randy, no one knew I was coming here to talk to you,” Linden said quietly.

“Yes. One guy who works in a bar sticking around to watch this place isn’t much of a threat. If whoever that is came here because of you, they’ll know you’re not some retired special-forces Rambo seeking a quieter life or something.” Linden paused to gather his thoughts. “I don’t suppose you know jujitsu or are secretly a black-ops sniper?”

Tyler laughed and spread his arms wide. “No. Sorry. Just a teacher turned inn worker who really hates the cold. I can shoot that gun, however.”
Powered by